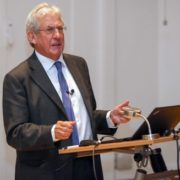 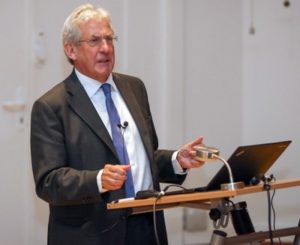 “The Sublime Utility of Useless Science”

…how science and innovation stand at the center of any successful strategy for the long-term economic development of a country, and how it is even more important and profitable to create an atmosphere for fundamental research rather than to define specific targets…

Professor Echenique is a theoretical physicist at the University of the Basque Country in San Sebastián, Spain, and an external member of SFB 1083 who has continuously engaged himself as a vivid supporter of fundamental science. From 1980 to 1984, he served as a minister for education and culture in the first Basque government elected after the Spanish transition to democracy. In recognition of his fundamental scientific contribution on the interaction of electrons and ions with solids and solid surfaces, Echenique received prestigious prizes, including and the Prince of Asturia Award and the Max Planck Research Prize. In 1999, he founded the Donostia International Physics Center (DIPC), a center of excellence that receives significant funding from private donations. In 2016, his institute received an award by the European Physical Society (EPS), recognizing not only the outstanding contributions of the DIPC in the field of condensed matter physics and materials science, but also for its numerous, successful activities in the outreach and communication of science.

This site uses cookies – small text files that are placed on your machine to help the site provide a better user experience.

We may request cookies to be set on your device. We use cookies to let us know when you visit our websites, how you interact with us, to enrich your user experience, and to customize your relationship with our website.

Click on the different category headings to find out more. You can also change some of your preferences. Note that blocking some types of cookies may impact your experience on our websites and the services we are able to offer.

These cookies are strictly necessary to provide you with services available through our website and to use some of its features.

Because these cookies are strictly necessary to deliver the website, refuseing them will have impact how our site functions. You always can block or delete cookies by changing your browser settings and force blocking all cookies on this website. But this will always prompt you to accept/refuse cookies when revisiting our site.

We fully respect if you want to refuse cookies but to avoid asking you again and again kindly allow us to store a cookie for that. You are free to opt out any time or opt in for other cookies to get a better experience. If you refuse cookies we will remove all set cookies in our domain.

We provide you with a list of stored cookies on your computer in our domain so you can check what we stored. Due to security reasons we are not able to show or modify cookies from other domains. You can check these in your browser security settings.

We also use different external services like Google Webfonts, Google Maps, and external Video providers. Since these providers may collect personal data like your IP address we allow you to block them here. Please be aware that this might heavily reduce the functionality and appearance of our site. Changes will take effect once you reload the page.